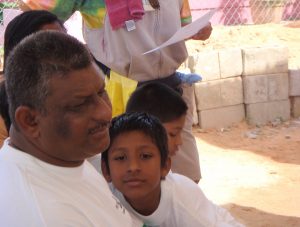 Massive holes in the galvanized roof of Indar’s home let in the rain all year, continually rotting the dilapidated structure and destroying the family’s mattresses.  After the collapse of the floor in his children’s bedroom, the whole family was forced to sleep in one room.

Indar had once attempted to shore up the back of his home with boards from an abandoned construction site, but termites on the site soon devoured the new boards.

During the first site visit, Indar’s children were observed peering into a large hole where an enormous snake resided.

It was immediately obvious that something had to be done to move the family into a safer environment quickly.  With Habitat’s help, Indar was able to find assistance through the compassion of local sponsor Methanex.

Local and international volunteers worked tirelessly to complete the new house, and in April 2011, Indar and his family moved into their new, safe Habitat home.