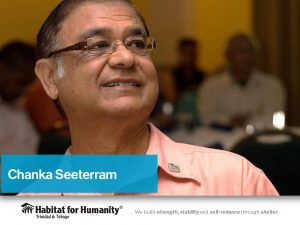 Chanka Seeterram was the third and longest-s erving chairman of Habitat for Humanity in Trinidad and Tobago; from 1999 – 2012, thirteen of our twenty years.  He was fondly referred to as the Chief Fundraiser using his network to open doors, and accompanying the National Director to present us to major donors and stakeholders. It was through his work and influence that we were able to convince Former Presidents Sir Ellis Clarke and George Richards to become patrons of our National Affiliate. Under his leadership the Advisory Board was established and chaired by Sir Ellis Clarke, and Habitat later remodelled this board into the ambitious Capital Campaign – “A World of Hope” – to raise USD 10 Million, with the first pledge card signed by Mr. Seeterram himself.

Mr. Seeterram made himself readily available to management and staff, and was very receptive to all ideas, allowing us to dream big without reservation, while his natural financial prudence reigned in the team’s enthusiasm when necessary. Like the Scouts, he was renowned for always being prepared, and personally inspected sites before major builds to ensure that everything was in place for a successful project.